The Cégep de la Gaspésie et des Îles is inaugurating today on the Gaspé campus a first food forest that will be accessible to the entire community. Around 20 staff members planted around 40 trees. Born at the instigation of the Green Committee and the Forest Technology Department of the Campus, this forest will give apples, pears, raspberries and other varieties of fruit in a few years.

A project has been germinating on the Gaspé campus for several years now: to establish a nourishing forest on the grounds of the Cégep, in the heart of downtown. Samuel Pinna, teacher in forest technology and certified arborist, coordinator of the food forest project, explains: “The food forest at the Gaspé campus is largely aimed at food self-sufficiency as well as educational activities and participatory research. A food forest is a permanent garden of edible plants similar in design to a natural forest. Such a space is made up of trees, fruit bushes and perennial herbaceous plants.

A forest open to the community
During a meeting in the fall of 2018, this idea was very favorably received by various stakeholders in the community. Partners, such as Nourrir notre monde Côte-de-Gaspé and the community gardens of Gaspé, have made it possible to improve the objectives of the project.

The location of the land, behind the campus, allows students; members of the Gaspé community, young people from nearby elementary and secondary schools, as well as gardeners to enjoy the place.

Applied research
This nourishing forest is intended as an outdoor study laboratory for courses in several programs offered at the Gaspé campus. In particular, the Department of Forest Technology wants to stand out by better responding to the current aspirations of students, which include understanding and managing forests in a multi-resource and ecologically efficient approach. The forest project has already served as a support in forestry courses where students have participated in soil analysis and community consultation.

The varieties
For four years, different steps have been necessary to advance the project. “We consulted the student, college and local populations, defined our nurturing, educational and research objectives, carried out analyzes of the site and the soil, determined the main axes of circulation and delimited the cultivation area. Last year, we prepared the ground with a rotary tiller, sowed green manure with oats and field peas, chose the fruit varieties and today we are planting! says Samuel Pinna. Around thirty apple trees are planted, of which 4 varieties have been selected for their cold hardiness, their resistance to disease and the different harvest dates.

Since 2008, various actions to enhance the wooded area have been carried out, the nourishing forest is added to the creation of trails, cleaning chores or the construction of the belvedere. 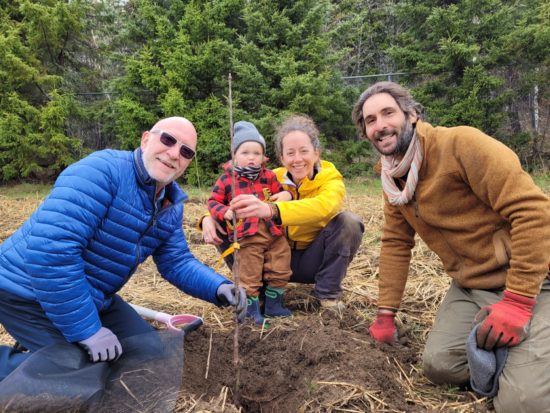 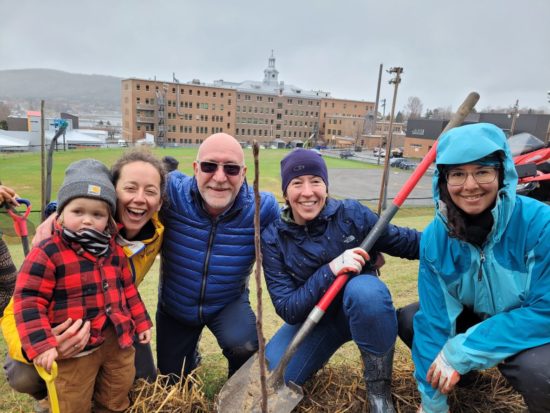